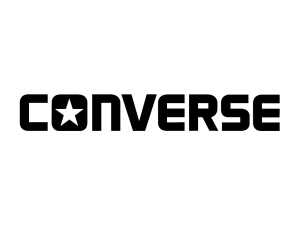 Converse is an American shoe company that designs, distributes and licenses sneakers, skating shoes, lifestyle brand footwear, apparel, and accessories. Founded in 1908, it has been a subsidiary of Nike, Inc. since 2003. During World War II, Converse shifted its manufacturing to make footwear for the military. It was one of the few producers of athletic shoes and for over a half century the company dominated the American court shoe market. From the 1970s, the company lost its dominant position as competitors presented their own styles.
Today the company's portfolio include products under the Converse, Cons, Chuck Taylor All-Star, Jack Purcell, One Star, and Star Chevron trademarks. Converse also frequently collaborates on special edition product releases with other brands such as John Varvatos. Converse shoes are distinguished by a number of features, including the company's star insignia, the All Star's rubber sole, smooth rounded toe, and wrap-around strip.
As of 2019, Converse sold products through 109 company-owned retail stores in the United States and 63 stores in international markets. Converse employees are counted among the 76,700 employees of Nike Inc. worldwide.Converse has been making Chuck Taylor All Star and One Star sneakers since they started over a century ago, and now we work to make new street style classics. What you wear defines sport, street, and creative culture, and they’ve been redefining it with you all along. When you wear Converse products, you create a culture of authentic street style simply by being yourself. Whether they’re on the feet of a ‘70’s basketball star in a history book or on the street with you today, Chucks have always signified cool...because you wear them. They don’t know where you’ll go, but they know you’ll take Converse to the future with you.